What is rosacea and what are the symptoms?

It begins as a blush/flush more intense than others, and with time can cause permanent redness. It can spread from nose/cheek region to other parts of the face, and all the way to the chest/back areas. It is possible to have more than one subtype. 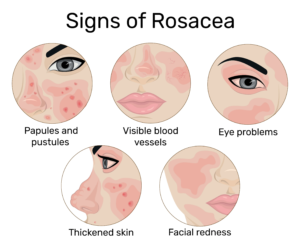 There are four subtypes of rosacea:

How can rosacea affect my lifestyle?

Surveys by the National Rosacea Society have shown that as many as 41% stated that their rosacea caused them to avoid social engagements and public contact. Often patients worry they will get worse or scar, and worry about side effects of treatment. 70% of people studied said that living with rosacea lowered the self-esteem and confidence. When rosacea is severe, 70% said the condition affects their work, with almost 30% saying it caused them to miss work. Sometimes the condition causes anxiety because others may think the patient has a drinking problem, due to the associated redness. Studies show that a patient’s quality of life improves when they have fewer symptoms/signs of rosacea.

What causes rosacea to occur in people?

Rosacea is common, with over 14 million people with the condition. Often, people are between 30 and 50 years of age, fair complexion, and have had a relative with the condition, or severe acne. Women are slightly more likely to get it than men, but are not as likely to get as severe a case as men. Children can get rosacea, too. The cause is still being studied by scientists, and it is thought the immune system is involved. H pylori is a bacteria hat causes intestinal infections, is commmon in rosacea patients, and may contribute. Demodex, a mite common on human skin may be involved, as it appears in large numbers on rosacea patients.

How is this condition diagnosed and treated?

To diagnose rosacea, a dermatologist at Dermatology of Seattle will examine your eyes and skin. First, all symptoms and signs are discovered, which is important because different types of rosacea need different treatments.
There are various ways of treating the condition. Wearing sunscreen helps prevent irritation on a day to day basis, and an emollient can encourage the skin to repair. Laser and light therapies are sometimes used, especially to reduce thickening of the skin. Sometimes antibiotics are prescribed. Some other methods involve dermabrasion, or electrocautery. Eye medication is sometimes prescribed for patients with ocular rosacea. While there is no cure for rosacea, many see their rosacea clear, even after almost decade-long term with the condition. A skin care plan at Dermatology of Seattle can help manage rosacea.

If you're concerned about rosacea, please schedule an appointment. We can help!

Check out some of our awesome reviews:

Scott Carey
Dr Levy is great, first day I saw him he took care of my light skin and told me how to take care of it. Without him I wonder what may have developed. Edit: 9/15/2020- Thanks Dr. Levy for 25 years today! Happy anniversary!

Shelena Helvey
I have been to theor Burien location several times now for various procedures from a full body check to mole removal. Every staff person has been kind, helpful, courteous, and professional. Their office is clean and they enacted COVID precautions quickly in response to the up tick in cases to help ensure decreased contact with others while still keeping scheduled appointments. This is my new home for all of my dermatology needs!
Copyright ©2020 Dermatology of Seattle - all rights reserved